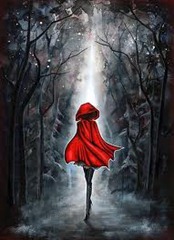 Hair like burning embers. Eyes as blue as the ocean deep. Smooth pearly white skin; she’s a vibrant youth. Cloaked in a flowing fabric of silk to keep her identity a mystery; she walks.

A pebbled road stretching beyond her field of vision cuts a neat path through dense forest. A beautiful scene by day; a dangerous journey by night… especially for one as young as she. Her arm aches with the weight that she carries within her basket. She knows she must push on. Time is of the essence. Twilight descends upon the land. A chorus of cicadas begin a rythmatic chant. The air becomes still as the temperature drops. Her mission is a simple one, but laced with danger for she is hunted.

Hunted by a being who wishes her to fail. A being who has waiting patiently for quit some time to end her life. A ghastly creature with translucent skin and a skeletal frame. Patches of matted hair sparsely grows about  his body. Fathomless black orbs sit where eyes should be. A jagged razor filled slit lusts  to tear into flesh. He loathes her. She represents everything good in the world. She is filled with a beautiful strength and power that he must retain. She’s the last of her kind. He’s killed the others who held the same power; literally sucking the life from them.

Scanning her surroundings, she realizes just how alone she is. Fear creeps slowly into her heart and she swallows hard in an attempt to push it back down. This is not her  first mission that has required her to take this path… but she senses this could be her last. The ground crunches loudly beneath her boots. Bony wooden arms reach out toward her from the edge of the path. With only a couple miles more to go until she reaches her destination, she musters the strength within her. Harnessing it to give her the courage required to continue.

To anothers’  eye, she’s a typical girl of 17yrs. Average height with a petit frame. Dressed in a simple garb of striking blue to complement her features. To one who really knows her, she’s a powerhouse. Someone you wouldn’t want to screw with. Packed into that little body is a strength that could rival the strongest of men. Born and bred to protect; to conquer. Rose is her name, but they call her Red.

Darkness has fully descended. Lacking  light, Rose reaches inside the leather satchel attached to her waist and pulls out a match. She then begins to search for materials to construct a torch. When lit, flames dance upon the wood casting an eerie light. Shadows leaping amongst the trees cause Rose to take another sharp look at her surroundings. “I haven’t got far to travel. I can do this.” She whispers.

Glancing down at the woven basket, she is reminded of it’s contents and the importance the object holds. It’s the last crucial step in saving her family. The last chance they have if they want to live. Rose is the youngest of the three in her family to survive and the only one who can pull this off. The only one born with the power. She doesn’t fully understand the writing etched in the granite she covets, but her grandmother does. Her grandmother must decipher the ancient language so Rose will know how to battle the beast.

She thinks again of her father; his broken body and failing heart. The defeated look that constantly plagues his face since the attack that killed her mother and sister. She hated to leave him, but both understood the consequences if she did not. Hot tears spring to her eyes as she pictures him… just lying there helpless. At that moment any fear she had dissipated , a new emotion began to take it’s place.

A rage so heavy it turns her creamy white skin a deep shade of red. Rose quickens her pace.

Practically sprinting and in a semi state of trance, Rose fails to pay attention to her surroundings. A black, feathered creature swoops from a nearby branch nearly knocking her silky hood from atop her head. Shocked, Rose stumbles to the hard earth grunting as jagged pebbles dig into her hands and knees. She immediately  reaches to her side checking on her precious cargo.”Still there.” she sighs. She notices her torch  has rolled a foot away and has begun to slowly die down.  She quickly jumps to her feet in order to save her only source of light, but she’s too late. Rose is now engulfed in complete darkness; there’s little moonlight to be found. She has no choice but to keep moving, so she does.

Preceding with caution, Rose makes haste. She is not afraid to be among darkness; it’s the creature lurking within that causes her blood to run cold. She has eluded death once….

Her efforts are soon rewarded when she spies  a glimpse of light in the distance. Her grandmothers village is just ahead. “I made it!” She thinks to herself as a smile plays on her lips. Drawing closer, strange noises reach her ears. A sudden scream rings through the night and stops Rose in her tracks. Her breathe catches in her throat as she listens. Another scream… then another. Soon the little village is busting with the sounds of destruction; sounds of pain. Running to the cold stone walls, she peeks through a broken segment. Looking into the madness, into death. Her fears are realized.

*This post is part of a writing workshop for Bloggymoms 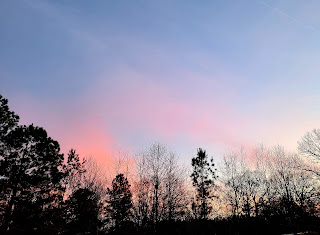 
~Birds of a feather~